Tucked into a renovated storefront off South Street, the “hippest street in town,” the pocket-sized Shubin Theater (43-seats) presents some of the hippest theater in town. There’s no season: the owner stages productions as inspiration hits and she leans towards the original, eclectic and sometimes offbeat. The theater is small but professional. It’s also a popular venue among new playwrights showcasing their productions. The Shubin has served as the unofficial home of the Philly Improv Theater since January 2007, with PHIT currently producing 2 weeks of shows per month in the venue and two longer runs throughout the year. 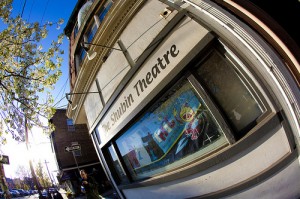 Denise Shubin wanted to produce what she wanted, when she wanted. With little interest in the business end of show biz, the actress/dancer/opera singer and her artist husband turned an abandoned shell of a house into a low-overhead venue. In 1987, they launched the Shubin Theater, now a staple among Philadelphia’s small theaters.