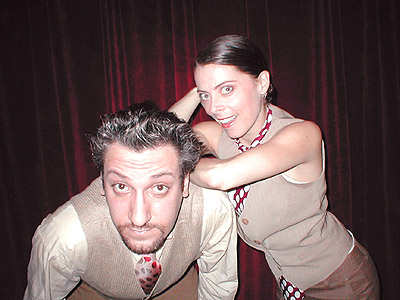 SHOW DESCRIPTION
Hailing from New York City/Austin, imp. has been performing nationally since 2003, combining the inspirations of Commedia dell’Arte, Cirque du Soleil, Jacques Tati and Bill Irwin into their improvisation. Imp. was originally created in 2001 by Asaf Ronen who had just finished scouting talent for Cirque du Soleil. Inspired by the audition process he witnessed, Asaf created a new approach to improvisational scenework. Imp. was reformed eight years ago as a two-person troupe featuring goga’s Karen Wight who pulled from her classical theater and dance background. Together, Asaf and Karen have explored the depths of silent communication and have taken the show on the road to Chicago, Miami, Oberlin, Seattle, Toronto and other locations across the country. Imp. always holds to its basic tenets of what makes a story and its characters engaging and how the body can be used more concisely to convey those ideas